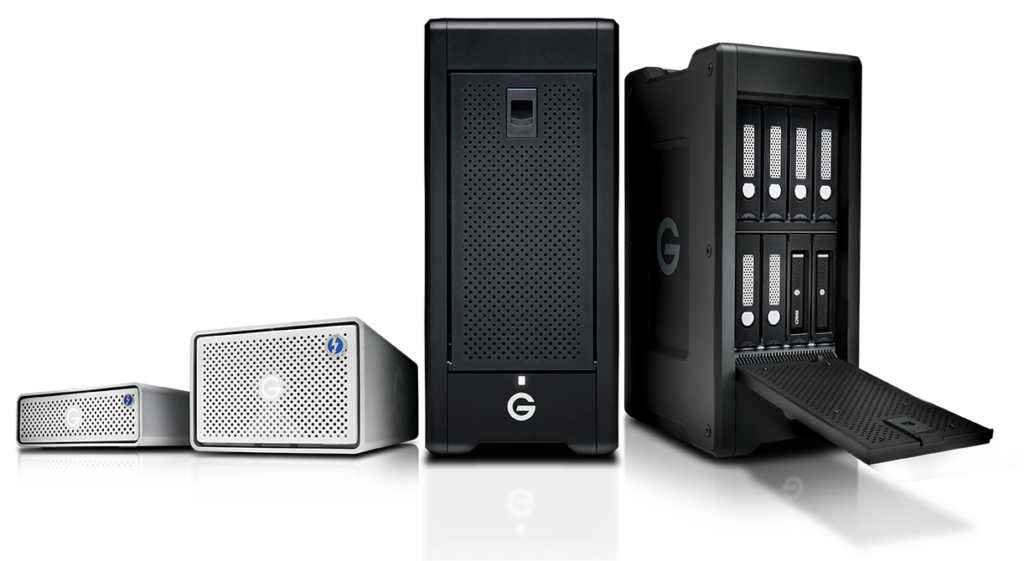 G-Tech’s mission is to provide the creative community with quality products that incorporate superior industrial design, functionality, usability and performance at affordable prices.

To help you decide which G-Technology Hard Drive is best suited to your needs, please read below for an overview on the most popular G-Technology products we supply.

The ‘G-Tech ev RaW’ HDD (ev stands for evolution) is part of the G-Technology Evolution Range. The ‘ev RaW ‘ is a BUS powered USB 3.0 drive with a rugged bumper so ideal for working in the field. The ‘ev RaW’ is also compatible with USB-C and has an additional SATA port enabling it to be inserted into the G-Dock or G-Speed Shuttle RAID Chassis.

The Armor is a Rugged, ‘All Terrain’ Mobile Hard drive designed for travelers, outdoor photographers and film makers. It has a strong aluminium chassis with a rubber bumper making the unit rain, dust and shock resistant. Compatible with USB-C, Thunderbolt-3 and USB 3.0.

OR the G-Drive Mobile Pro SSD with Thunderbolt-3 which has superier speeds of up to 2800MB/s. Edit 8K footage on the move!

As SSD’s have not moving parts they are much more resilient so ideal for use when travelling or working in “in the field”.

The G-Drive is currently available in two versions.

Available capacities range from 4TB up to 14TB!

G-RAID is a 2-Bay storage solution configurable in the following RAID modes:

G-Speed has 2 x Thunderbolt-3 ports for working with the latest MACS and will allow for daisy chaining.

Configurable in multiple RAID modes via the G-Speed RAID management software. The G-speed can be configured in: RAID 0, RAID 5, RAID 10, JBOD.

G-Technology hard drives are formatted for MAC OS X “out of the box” and are Time Machine compatible. Simply plug the drive in to your Apple MAC computer and the G-Technology icon will appear on the desktop, ready to use.

If you are transferring data between MAC and PC you can leave the HDD formatted for MAC and install HFS+ for Windows by Paragon, or format them as ExFAT but we do not recommend using ExFAT.

How To Install HFS+ for Windows

All product manuals and full product specifications can be downloaded here.

Datastores are Premier Partners with G-Technology and we specialise in G-Technology storage solutions. Should you require any further information or technical support please visit our Central London Store (W1T 4PR), call our sales team on 0207 291 0890 or browse our G-Technology online shop.