This product had been made End Of Life.

The CalDigit T4 Thunderbolt 3 supersedes the now discontinued Thunderbolt 2 version and with it adds extra functionality.

Not only does it provide Multiple RAID modes which can be combined, the Thunderbolt 3 interface also charges the connected laptop and the T4 also provides the ability to connect a 4K monitor using the added display port.

The Caldigit T4 ranges from 4TB up to a massive 32TB and is also available with SSD’s (Call sales for SSD option).

Not only that but the 4 disks mean that you can mix RAID levels. e.g. You could configure two drives to RAID 0 and the other two to RAID 1. That is just a fraction of the possibilities. Get ready to design the RAID you want!

The T4’s die-cast aluminum chassis offers a level of durability unmatched by inferior metals. The aluminum design also helps with heat dissipation keeping the T4 cool at all times. 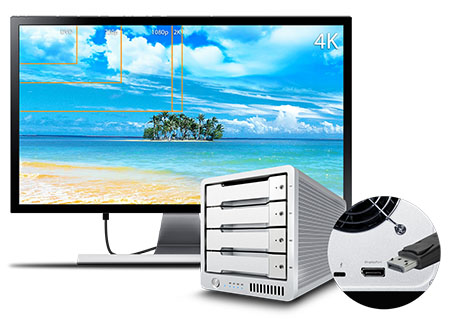